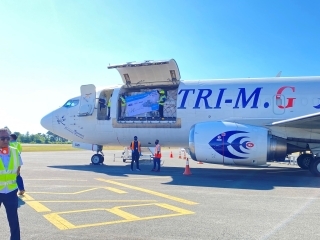 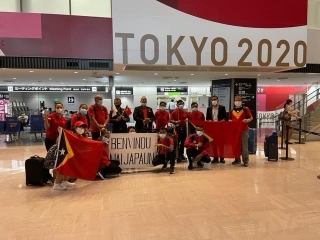 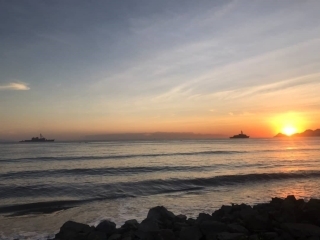 Kashima and Setoyuki with Beautiful Sunrise of Dili 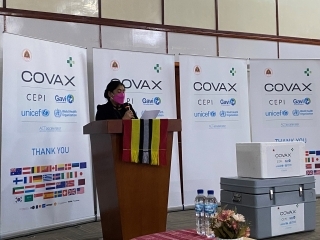 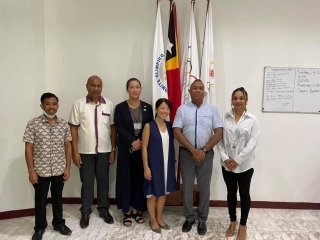 Japan stands by Timor-Leste as it drives forward the effort to tackle the spread of COVID-19.
The current outbreak of COVID-19 has dramatically changed people’s lives all over the world. Far too many people are facing unprecedented tragedies and tremendous difficulties. We hope the vaccines will help save more lives of Timorese people and contain the disease in this country.
As a co-founder of COVAX Facility, Japan is committed to equitable access to vaccines, diagnostics and therapeutics for all countries.  Japan and GAVI have recently co-hosted the COVAX Advanced Market Commitment (AMC) Summit, where Prime Minister SUGA Yoshihide announced that Japan will make an additional contribution of 800 million USD, which brings the total contribution of 1 billion USD to the COVAX Facility
In Timor-Leste, Japan will extend Emergency Grant Aid of approximately 2 million USD in order to assist the vaccine deployment. This assistance will provide cold chain equipment including regional cold-storage facilities and transportation through UNICEF and JICA. This Emergency Grant Aid will help get those vaccine shots to people’s arms in all corners of Timor-Leste.
So far, Japan has provided various assistance for COVID-19 response in Timor-Leste including providing 38 ambulances and medical equipment, setting up handwashing points, and stimulating local economic activities through food baskets. Japan is committed to providing more than 16 million USD of assistance in total for measures against COVID-19.

6/15/2021
Meeting with National Olympic Committee of Timor-Leste
On June 15, 2021, Embassy of Japan in Timor-Leste had a courtesy meeting with the board of National Olympic Committee to discuss about necessary preparations for Timor-Leste’s participation in the Tokyo Olympic Game.
Ms Seiko Toyama, First Secretary of the Japanese Embassy, introduced Ms Yu Yoshimori, who will attend the team during their stay in Ina-city, the official host town of Olympic athletes from Timor-Leste. Ms Toyama also introduced warm welcome of the Mayor Takashi Shirotori of Ina City, Host Town of Timor-Leste Olypmic Delegation, Mr. Iwao Kitahara, Former Ambassador to Timor Leste; and people in Ina City. 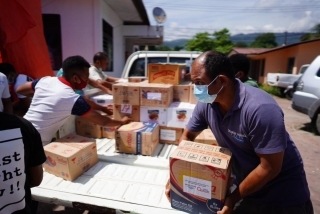 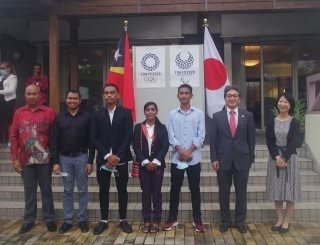 On 16 June 2021, the Government of Japan has decided to provide another disaster relief of 300 thousand USD through Japanese NGO “Peace Winds Japan”
In this project, material and technical assistance for the reconstruction of road affected by the recent flood as well as items to meet basic needs of the local community will be provided. This project is implemented mainly in Dili municipality.

On June 25, 2021, Ambassador of Japan to Timor-Leste, H. E. Mr. MasamiKinefuchi hosted a reception celebrating Tokyo Olympic Games and Timorese participation, inviting Timorese delegation to Tokyo Olympic Games at his residence. Reception was held with minimal invitees and according to the COVID protocol.
Ms. Imelda Felicyta Ximenes Belo and Mr. Jose João da Silva Viegas will be representing Timor-Leste to compete in swimming, and Mr. Felisberto de Deus will be representing Timor-Leste in the athletics. Among the distinguished guests at the reception were, the Secretary of State for Youth and Sports, H. E. Mr. Abrão Saldanha; Vice President of the National Olympic Committee, Mr. Mateus da Cruz de Carvalho; President of Timor-Leste Sports Federation and Athletics Federation, Mr. Afranio Xavier; and former Timorese Olympic athletes such as Mrs. Aguida Amaral, Mr. Augusto Ramos and Ms. Francelina M. Cabral.
During the reception, Ambassador Kinefuchi congratulated them for being selected to represent Timor-Leste and mentioned, "Timor-Leste has made a tremendous achievement from the ashes out of conflict and creating a robust nation in these 20 years and its participation to Tokyo Olympic Games adds a special meaning to this Olympics. I am confident that you, Timorese Delegation and athletes, will become an important part of the success of the Olympics and the positive messages the Olympics is sending out."
Secretary of State for Youth and Sports, H. E. Mr. Saldanha also felicitated, "I hope that our participation at the Tokyo Olympic Games of this year not only shows just another commitment of our government to participate in the prestigious international sporting events like the Olympics but I too look forward to seeing our participation of this year marks the beginning of a new stage that will bring us into sporting successes in the future."
Timorese delegation will depart from Dili to Japan on July 12, 2021. They will first stay in Ina City, Nagano Prefecture which is the host town for Timor-Leste athletes for their preparation. 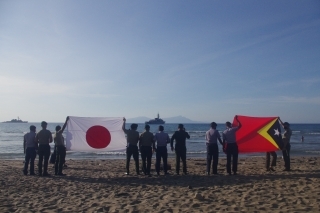 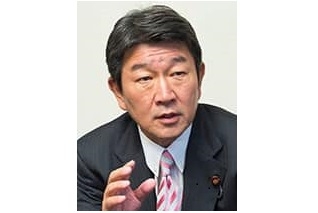 Japan Maritime Self Defense Force training squadron consisting of training vessels "Kashima" and "Setoyuki" visited Dili, Timor-Leste, from July 3rd to 5th. Because of the emergency situation due to COVID-19 pandemic, all exchange programs were carried out on line. This visit was the first in history and consolidated the existing defense cooperation as well as bilateral friendship between two countries for years to come.

Minister for Foreign Affairs of Japan, MOTEGI Toshimitsu announced on 13th July that Japan will provide AstraZeneca vaccines manufactured in Japan through COVAX to Asia-Pacific countries including Timor-Leste. Coordination with relevant organizations is underway, and the vaccines will be dispatched as soon as necessary preparations are completed.
The amount of vaccines to be provided to Timor-Leste is approximately 170 thousand doses. This new assistance is in addition to the recent Japanese assistance to Timor-Leste for its fight against Covid-19, including assistances to help establish the cold-chain delivery system, as the “last one mile” delivery of the vaccines.
Ambassador KINEFUCHI Masami said, “Japan has provided more than $16 million assistance to Timor-Leste through JICA, UNICEF and UNDP. I hope this additional assistance will help Timor-Leste in containing this dreadful pandemic.” 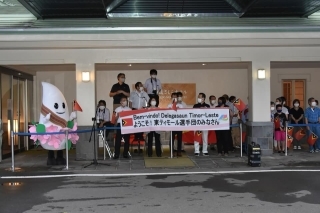 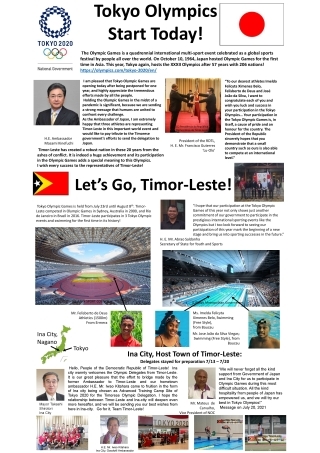 On July 13th, Olympic delegates from Timor-Leste arrived at Narita Airport, and received a warm welcome by Former Ambassador Kitahara and representatives of Ina-city, Official Host Town for Timor-Leste, as well as Ambassador of Timor-Leste to Japan, Mr. Ilidio.
In the evening of the same day, they arrived at Ina-city, 200 km west of Tokyo, and again warmly welcomed by the people of Ina-city. There, three athletes will prepare for their games at Tokyo until July 20th.