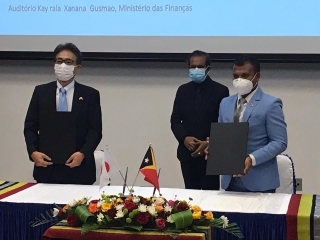 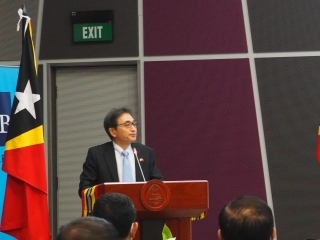 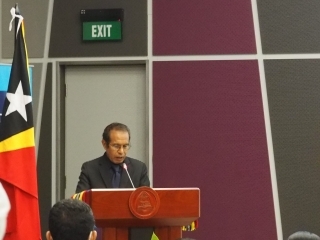 On 1 October, the Government of Japan has signed an exchange of notes with the Government of Timor-Leste on the grant aid to construct a new airport terminal of Presidente Nicolau Lobato International Airport.

The document was signed between the Ambassador of Japan to Timor-Leste, Mr Masami Kinefuchi, and the Vice Minister and Minister Interim of Foreign Affairs and Cooperation, H.E. Mr Julião da Silva. The ceremony was attended by H.E. General Taur Matan Ruak, Prime Minister, H.E. Mrs Armanda Berta dos Santos, Vice Prime Minister, H.E. Mr Jose Maria dos Reis, Vice Prime Minister, and many other members of the Government.
.
This grant of 4.901 billion JPY (approximately 44 million USD) from Japan is for the construction of a two-story passenger terminal building of 11,653 square meters based on the projected number of airport passengers as of 2030 and an accompanying power station. With the additional preparation works, the total amount of Japanese assistance on this project will be more than 46 million USD.

The construction of terminal facilities will improve the capacity and safety of the airport to meet the international standards. It will also contribute to enhancing tourism and connectivity of the country, the highest priority areas for the Government of Timor-Leste. The Government of Japan is committed to contributing in infrastructure development, hence achieving better future of Timor-Leste.

“Today is a much awaited day for us all: the day for the international agreement on the project of President Nicolau Lobato International Airport.” Ambassador of Japan to Timor-Leste Mr. Masami Kinefuchi said, “The past 20 years have been a period of reconstruction after restoring independence, and I hope Timor-Leste will make the coming 20 years a new stage of growth, bringing a more dynamic economic and social development, fueled by this airport project.”

Japan has been a long-standing partner for the nation-building of Timor-Leste since 1999. So far, Japan has successfully implemented many grant projects for the improvement of key infrastructure such as roads, ports, bridges and water supply systems in various regions of Timor-Leste.
(END) 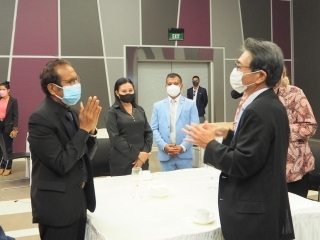